My Love Story with God 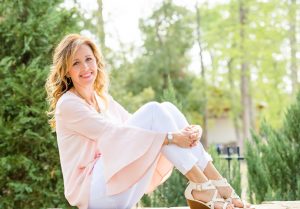 God has made beauty from ashes many, many times in my life. He has restored the years the locust stole away. He has been my constant source of hope and strength. He has done too much for me not to give Him glory. Life hasn’t always been easy, but God has always been faithful!

You see, I did not have the best of childhoods. My brothers and I could have easily become a victim of our circumstances, but we didn’t. We lost our father to suicide when I was 13 and my brothers were five and 15. And we lost our mom basically on that same day as she was not able to cope and sunk into deep depression.

My brothers and I were forced to take care of ourselves for the most part. We had food and shelter but our mom was too broken to cope. She tried her best but she was not able to break out of the cycle of depression. It was simply too much for her. She loved us dearly but she was completely broken.

During this time, I began attending church with friends, and it was there that I found Hope (Hope with a capital H). I attended several different churches with several different friends, and I knew I had found what was missing in my life. At the age of 16, I accepted Jesus as my Lord and Savior and became a Christ follower. #bestdecisionofmylife

I didn’t know much but I knew I had Hope. I remember telling God that I would attend church regularly when I had my own car.

A few years later when I was 19, I was introduced to a young man on a blind date. That date led to marriage two and a half years later. We married when I was 22 and he was 29. We put ourselves through college. After graduating, I was fortunate to be awarded a scholarship from the Rotary Foundation and was able to get my Masters degree in Scotland.

After finishing my Masters and moving back home, I worked briefly before becoming pregnant with our first child – a girl. Two years later, we had our son. Life was good! We didn’t have a perfect marriage but we were a happy little family…… or so I thought.

However, after 14 years of marriage, tragedy struck.

In May of 2002 when our kids were five and seven, I learned that my husband was in a relationship with someone very dear to me. I don’t have to explain the devastation that followed. Our marriage ended a few months later when it became clear that he wasn’t willing to end the other relationship.

The months that followed were dark and very difficult. If it weren’t for my kids, my God and my Bible Study friends, I don’t know that I would have made it. My best friend had a key to my house and many times had to force me to get out of bed. It was difficult not only emotionally but financially too. 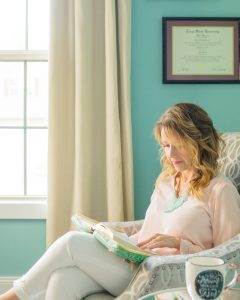 I wasn’t seeing the good.

To make things even harder, when I was a single mom and had virtually no health insurance, I had to have an emergency appendectomy. My self-employed insurance covered almost none of it so I was left with a huge hospital bill. I paid my $25 a month as that’s all I could afford. I didn’t even have enough money to buy my kid’s an ice cream most months.

But I did the best I could.

I did the best I could.

Months passed by, and I got a call out of the blue from the hospital telling me my debt had canceled! I have no other explanation but Jesus! He had canceled my debt at the hospital just like He did on the cross for us all! WOW! I could not and still cannot believe it. It was a total miracle!

God knew the desire of my heart was to be married again to someone who loves Jesus as much or more than I do. And He answered that prayer too. In 2006, I married Sam and inherited another daughter who was the same age as my son. Together we have 3 kids – who at the time were nine, nine and 11.

While we dated, Sam had told me that he really wanted more kids so I told him I’d pray, but we were old and already had three kids so I was certain God would say…. Naawwww, you’re good. Well God totally changed my heart and three months after our wedding I got off birth control. But I didn’t tell Sam. I didn’t want to get his hopes up and at times, I was a bit freaked out honestly. I was 40 years old — hello advanced maternal age. But somehow even in all that, I had complete peace.

However, once I was off birth control, the enemy came after me with all kinds of doubts. I wasn’t sure I’d heard God correctly so I thought to myself that I’d better get back on BC.

Yes, I was already pregnant. IN THAT FIRST MONTH. A miracle in itself especially as a 40-year-old!

But……at about 10 weeks into my pregnancy, I went in for an ultrasound and the doctor told me I had miscarried and that there was no heartbeat.

We were of course devastated. The doctor asked if I wanted to schedule a DNC and without hesitation, I said, no.

I now know that was God.

We went on with our plans and tried to deal with the heartbreaking news. Meanwhile, my mother-in-law was praying that God would change the situation. We had no idea. Our daughter was also praying for the baby.

I had to go back in about two weeks later when I did….. THE HEARTBEAT WAS THERE!

God had proven faithful beyond what we had even imagined. WOW! Today she is 11 years old and perfect in every way. Only God!

Each season of difficulty, God was there, listening to my prayers and answering them in His way and in His timing.

From there He’s been stretching me and taking me to new levels of trust, surrender, and obedience. The adventure with God is like none other. His love and presence are EVERYTHING!

I don’t know where this blog will lead or why I feel He has called me to start it but I hope that it provides encouragement and hope to others, but mostly I pray that if you don’t know this Jesus, that you will give Him a chance! It will be the BEST decision of your life.  God loves YOU!!! Yes, you! He desires to have a relationship with you!

If you’d like to learn more about God and having your own personal relationship with Him,