Grace To Live By 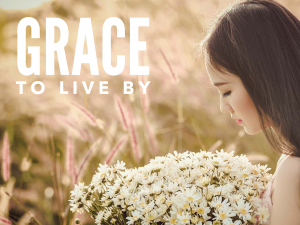 We’ve all heard of grace. It can be used in secular terms as in elegance or poise, but in Christian terms grace is unmerited and underserved favor. And if you’ve experienced grace, you won’t soon forget it.

One act of grace that has always stuck with me is a scene from the movie Les Miserables. It’s the scene when newly released prisoner, Valjean, is repeatedly rejected for being a convict but is finally welcomed in by a priest. Valjean’s old ways are still with him though, and he repays the kindness of the priest by stealing his sliver during the night and fleeing. When he is caught and dragged back to the priest, the priest looks at him, forgives him and even gives him more silver “that he forgot” so that the authorities would release him and not send him back to prison. Wow! Talk about grace! Through this encounter, Valjean is reformed and transformed. It changes his life forever.

Forgiveness is simply letting go of the bitterness and anger and allowing God to heal the wound caused by the person. It is easy? No, not at all. I vividly recall a very painful time when I was betrayed by people I dearly loved. Once the initial anger and shock wore off, I had no desire to forgive them, but I knew I had too. It was for my own good, and it was necessary in order for me to live in freedom. I knew my unforgiveness would not affect the other people, it would affect me. And so I prayed hard just for the desire to want to forgive them. I had to start small. I had seen what bitterness had done to others, virtually destroying their lives, and I didn’t want any part of that.

After many days (or was it weeks?) of praying, I finally had the heart to pray for the ability to forgive them. And I did. It was not quick. It was not easy. But it restored my joy, my life and my relationship with Christ. And for that I am thankful.

“Be kind and compassionate to one another, forgiving each other, just as in Christ God forgave you.” Ephesians 4:32