Praise Him in the Storm 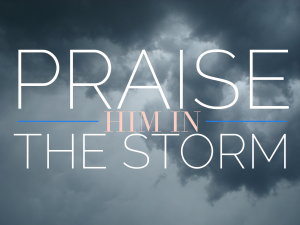 When times are tough, often the last thing we want to do is praise God. Our human nature would much prefer to worry, complain, cry and moan about our circumstances. As I write this, we are on day two of Hurricane Harvey. I’ll be honest, nothing in me feels like praising God, but that’s what we are called to do. He is our Maker and regardless of our circumstances or how we feel, we should give Him all of our praise.

This week during my Bible reading, I was struck by this story in 2 Chronicles about the power of praising God. It says, “As they set out, Jehoshaphat stood and said, ‘Listen to me, Judah and people of Jerusalem! Have faith in the Lord your God and you will be upheld; have faith in his prophets and you will be successful.’ After consulting the people, Jehoshaphat appointed men to sing to the Lord and to praise him for the splendor of his holiness as they went out at the head of the army, saying:
“Give thanks to the Lord,
for his love endures forever.”
As they began to sing and praise, the Lord set ambushes against the men of Ammon and Moab and Mount Seir who were invading Judah, and they were defeated.” (2 Chronicles 20:20-22)

So do you see how powerful their praise and worship was? They went out singing and praising the LORD, and their enemies were defeated! It was not their strength or their might; it was their praise!

“Know that the Lord, He is God; it is He who has made us, and not we ourselves; we are His people and the sheep of His pasture. Enter into His gates with thanksgiving, and into His courts with praise. Be thankful to Him, and bless His name. (Psalm 100:3–4)

As humans, we can never give God all the praise He deserves. “Who can utter the mighty acts of the Lord? Who can declare all His praise?” (Psalm 106:2) We do not and never will understand why these things happen or why God allows them but we can cling strongly to His promise that “in all things God works for the good of those who love him, who have been called according to his purpose.” (Romans 8:28)

During the many heartaches I’ve endured in my life (my dad’s suicide when I was 13, an unwanted and unforeseen divorce when my kids were 5 and 7, the loss of my mom and all my grandparents), that is the verse I continually return to. And you know what? HE has been faithful. EVERY. SINGLE. TIME.  Did it hurt during the time and long after? Yes, beyond belief. But He was faithful and He restored. He gave me the strength, the hope and the peace I needed to make it through — one day at a time.

So Father, I do give you praise and honor and glory in the midst of this storm. We thank You that You have a plan even when we cannot see it, and that You promise to bring good out of all things for those who love you and who have been called according to your purpose. We praise You that You are sovereign and despite what we see with our eyes, You will never leave us nor forsake us. You are a good, good Father and You deserve every ounce of our praise and worship. We thank you Abba. We love you and we trust you. Amen.